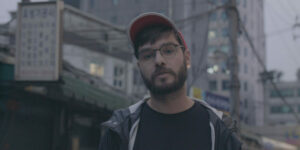 Theorist Lukáš Likavčan collaborates on art projects, including the simulation alt’ai, questioning machine protocols in communicating with environments. Exploring imaginations of Earth from the impersonal, totalising view to one in which humans are environmental accidents at home anywhere, he finds resonance in a line from Holly Herndon’s Extreme Love (2019): ​‘We are completely outside ourselves, and the world is completely inside us.’

In his lecture Introduction to Comparative Planetology, Likavčan looks into how as a philosophical genre, comparative planetology presents an intertwined analysis of visual cultures of imagining the Earth and geopolitics of climate emergency. It compares different ​‘figures’ of the planet – the Planetary, the Globe, the Terrestrial, Earth-without-us and Spectral Earth. These five figures function simultaneously as visual paradigms, geopolitical regimes and design briefs; each of them has different prospects in guiding our interventions against runaway global heating, and ultimately against mass species extinction. While engaging in this conceptual, cosmological endeavour, comparative planetology seeks to become one of the navigational tools in plotting our way out of the impasse of modernity. 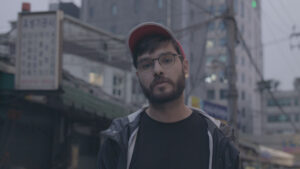 Lukáš Likavčan is a researcher and theorist who writes on the philosophy of technology and political ecology. Concluding his PhD in environmental studies at Masaryk University, Brno, he now teaches at Centre for Audiovisual Studies at FAMU in Prague and Strelka Institute for Media, Architecture and Design in Moscow, a graduate of their experimental New Normal programme. As a researcher, he was based at Vienna University of Economics and Business, Hong Kong Polytechnic University and BAK – basis voor actuele kunst, Utrecht. Oscillating between academic practice and a broad zone between art and design, he focuses on infrastructural conditions of subjectivity, abstraction and imagination. Likavčan just released a book Introduction to Comparative Planetology (2019, Strelka Press) that presents an analysis of visual cultures of imagining the Earth and the geopolitics of climate emergency.

Lukáš Likavčan. Photo by The Rodina.

Magical Thinking: Towards a Future Worth Living – Conference Day 2

This conference proposes the idea of ​‘magical thinking’ – a belief that thoughts and actions can influence the world – as a provocation. In current dystopian scenarios of the future life on Earth, from environment to democracy, imagining a future worth living might reduce anxiety that paralyses action and create openness to a more inclusive way of thinking. The question that needs answering is what is a future worth living (and for whom), and which tactics could get us there. How do we get from climate emergency and catastrophic populism, fuelled by extractive capitalism, to a world of social/​ecological justice and multispecies equality? With focus on artistic research and strategies of visibility and mobilisation that art holds, this forum wishes to open critical discussions and propose possible ways to the future worth living.

How can one make sense of the climate crisis – environmental, but also political – when confronted with the immense complexity of Earth both in time and space? Two panellists, Rania Ghosn (DESIGN EARTH) and Lukáš Likavčan, speculate on and activate environmental imagination through geographical fiction and comparative planetology. Their research tactics take up history and geographic representation in an attempt to untangle the ways visual culture imagines the Earth and geopolitics of climate emergency.

This panel will be moderated by Victoria Douka-Doukopoulou.