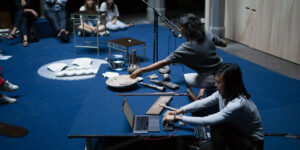 Maika Garnica
From Bow to Ear

Maika Garnica formed ensemble Sui Moon in 2015, which quickly extended from visual art into music. A similar synaesthesia afflicts the instruments she makes to feel sound. The instruments are largely breath-activated, after years of the artist’s playing trumpet, and often made of clay in sympathy with ancient and contemporary practices. In performance the oddly communicable language is warm and enhanced by the element of surprise.

Five arches mark the space, holding ceramic instruments in Maika Garnica’s sound piece From Bow to Ear. At set times, the performative installation gets activated by the artist, who through the use of contact microphones, makes her touch resonate. The metal holder’s undulating line is shaped like sound waves and maps a territory for tactile and sonic encounters. The introduction of electronic devices in Garnica’s practice layers the gestural and systematic in a direct sound-play experience. 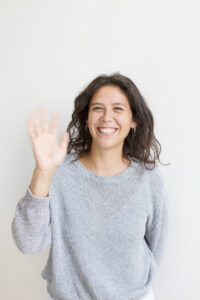 Maika Garnica is a Belgium-based sculptor and musician who explores the relationship between the environment, spectator and artist. She often applies prototypes to comprehend the complex relation between form and matter while instigating the position of the body as a vehicle for social connection. Through various contexts, the nature of the work shifts spontaneously from sculpture to utilitarian object to sound installation. She has performed in different venues and festivals including Eastern Daze x Berlin 2019.