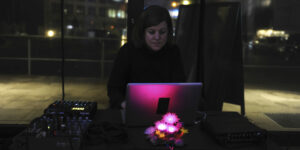 Felicity Mangan’s instrumentation – largely animal – comprises field recordings from her native Australia and involves attaching piezoelectric transducers to hear things. She has performed at Berlin Atonal and with Native Instrument. Her 2019 digital track Stereo’frog’ic, released on Longform Editions, treats the listener to a frog choir from multiple angles. 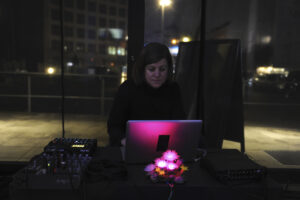 Felicity Mangan is an Australian artist and composer who has been based in Berlin since 2008. In different situations such as solo performance, collaborative projects with other musicians or installations, Mangan plays her found native Australian animal archive and other field recordings, utilising electro-acoustic techniques and quasi-biophonics, through a stereophonic system and/​or often via piezoelectric transducers attached to found objects. Mangan has presented projects in galleries, gardens, clubs and festivals throughout Europe including Berlin Atonal and Technosphärenklänge (HKW/CTM). She has played in collaborative projects Native Instrument (Shelter Press, Entr’acte) and Plants and Animalia and recently released the digital track Stereo’frog’ic on Longform Editions.