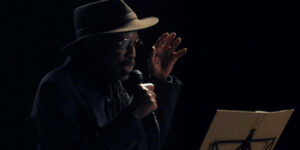 Artist Vincent Meessen, who with ten artists represented Belgium at the 2015 Venice Biennale, brings to Sonic Acts his film Ultramarine, featuring African-American poet and hip-hop precursor, Kain The Poet. In considering the exile of the Black Arts Movement member to Amsterdam in the 1980s, Meessen’s video portrays museological objects in relation to Kain’s own belongings.

The video installation Ultramarine offers a chromatic, historical and discursive filter for the telling of its central figure Kain The Poet. The precursor of hip-hop in the late 1960s and Black Arts Movement (BAM) member delivers a radical spoken word performance accompanied and improvised by Belgian percussionist Lander Gyselinck. Ultramarine, referring to a deep blue pigment but also to overseas regions, is a visual poem constructed from locally chosen historical objects and a sort of a ​‘narrated exhibition’. This format creates the possibility of connecting Kain’s radical poetics to a larger frame of investigation: museum objects and artworks from very different origins, all stored in Toulouse museums and in collections of the Occitan region. Museum objects calling up colonialism – funeral figurines, world maps, textiles – are juxtaposed with Kain’s own props intoning his exile to Amsterdam in the 1980s. Disrupting the Eurocentric written logic of historiography as well as that of museum classifications, Ultramarine sets a constellation of objects moving and acting, enabling them to perform their possible agency.

Baltimore-born artist Vincent Meessen lives and works in Brussels. His artistic work is woven from a constellation of actors, gestures and signs that maintain a polemical and sensible relation to the writing of history and the Westernisation of imaginaries. He decentres and multiplies gazes and perspectives to explore the variety of ways in which colonial modernity has impacted the fabric of contemporary subjectivities. Both in his work as an artist and in his paracuratorial activities, he likes to use procedures of collaboration that undermine the authority of the author and emphasise the intelligence of collectives. With ten guest artists, Meessen represented Belgium at the 56th Venice Biennale in 2015.

Still from 'Ultramarine' (2018) by Vincent Meessen.