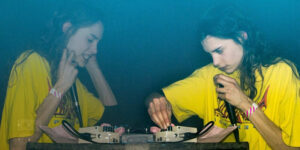 Welsh underground star Elvin Brandhi is best known for her rap/​noise project Yeah You with her dad. A vital creative force, her relentlessly paced electronics spliced with her own voice are crystal castles whose struts are finely sliced samples, intimate in their total absorption. 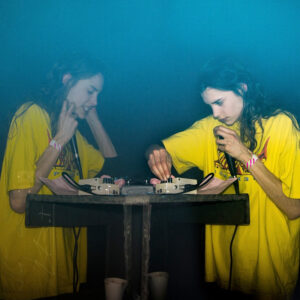 Elvin Brandhi is an improvising lyricist, producer and sound artist from Bridgend, Wales, who builds aberrant beats from field recordings, tape, vinyl, instrument and voice. She uses sound and voice as an expansive language to transgress intrinsic systemics and inherited syntactical etiquettes. Her live shows are unyielding bursts of erupting animation where her caustic stream of consciousness cavorts with restless, glitched-out heaviness. Her recent EP Shelf Life was released on C.A.N.V.A.S in 2018, and she is one half of father/​daughter noise-improv berserkers Yeah You who have released on Alter, Slip, Opal, Psychik Dancehall and Good Food. She also performs in collaborations such as Bad@Maths, INSIN and unreleased projects such as Gailvn Keiln, OCDC and 0n est Malade.

The opening night continues as Sonic Acts turns up the volume with a restless club programme of experimental electronics, generative sequencing and brutal rhythms. This adventurous programme is a dark reminder of the quivering extents where dance music lingers with chaos and disorder. A new wave of turbulent sonic explorers, rhythm analysts and improvisers present us with fragmented narratives and abstract impressions of technology that redefine the limits of dance music.