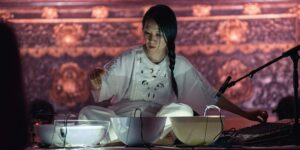 Instrumentation is limited only to where it is taken. Jalatharangam, the majestic Indian Carnatic tradition in which bowls of water are played, gently pushed opened the door for Tomoko Sauvage’s invention of bewildering electro-aquatic instruments. The beautiful music she makes with them shares the intensely calming hollowed-out wisdom of their original inspiration, with the welcome surprise of an impossible meeting of elements.

Over the past decade, Tomoko Sauvage has been working on a ​‘natural synthesizer’ combining water, ceramics and hydrophones. Porcelain bowls, water drops, waves and bubbles as well as hydrophonic feedback and electronics are the main ingredients of her instrument that generates a fluid timbre. Waterbowls contemplates, tunes and connects with both the material and the immaterial in keeping a fragile balance between hazard and mastery. 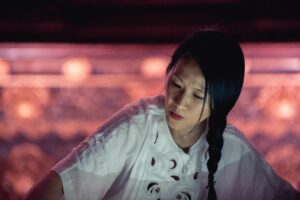 Born and raised in Yokohama, Tomoko Sauvage moved to Paris in 2003 after studying jazz piano in New York. After listening to Alice Coltrane and Terry Riley, she began to focus on improvisation in Hindustani music. In 2006, she attended a concert by Aanayampatti Ganesan, who plays the traditional Carnatic water-filled porcelain bowls called Jalatharangam. Sauvage took this as inspiration in making an underwater microphone, and later, electro-aquatic instruments. Her latest solo album is the LP Musique Hydromantique (Shelter Press, 2017). Her compositions have been aired on the BBC and NPR and she has performed at international festivals and venues including The Long Now – Maerz Musik in Berlin and Unsound Festival in Krakow.