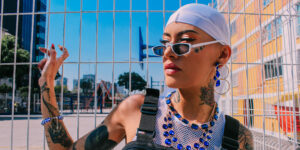 Wildly in-demand reggaeton DJ Rosa Pistola comes to Sonic Acts from a past drenched in Mexico’s underground noise scene. Now a member of Perreo Pesado, an underground reggaeton collective releasing and producing songs, her mixes finely tuned to the streets are as honest as they are danceable, earning her up to five gigs a night. Recent appointments include Boiler Room, Sónar and Glastonbury and a residency at Rinse FM. 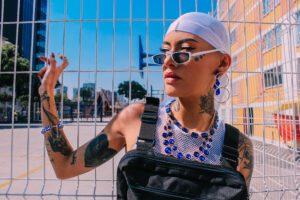 Rosa Pistola is Laura Puentes, a Colombian DJ based in Mexico for the last thirteen years. She has been a part of underground noise and experimental projects like Mangina, Raters and Boy Band, in addition to projects edited by her label Petit Pistolette, which produced more than ten pieces of music video art. In 2015 she became a reggaeton DJ and along with DJ Krizis and DJ Sueño formed Perreo Pasado, a crew dedicated to expanding ghetto frequencies. Specialising in underground and experimental reggaeton, Pistola creates a highly erotic, dangerous atmosphere on the dance floor. She participated in the first reggaeton edition of Boiler Room beside DJ Playero and in the 2018 edition of Sónar in Barcelona. Also in 2018, she was the first reggaeton DJ to appear in EDC Mexico. She had a residency at Rinse FM.