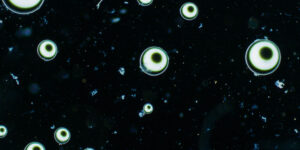 Bacteria, algae and other microbes are essential for the very being of life on earth. Marjolijn Dijkman and Toril Johannessen warn us that every second breath we take is produced by algae in the oceans. Those ideas are beautifully visualised in their film Reclaiming Vision, which is a topic of their lecture at the Academy conference.

A starting point of this talk is a film that was captured through a microscope. Its diverse cast of microorganisms were sampled from the brackish waters of the inner Oslo Fjord, alongside algae, cultivated at the University of Oslo. Starting from the assertion that looking evolved from the sea – eyes, in fact, evolved from marine algae – Reclaiming Vision takes the viewer on a journey through various ways of looking at, relating to and influencing nature. 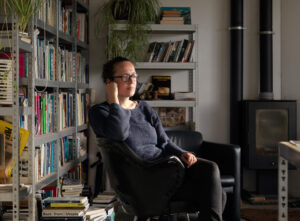 Brussels-based artist Marjolijn Dijkman​’s practice addresses the human desire for knowledge, combining speculation with science in works that seem sci-fi in form. In reflecting on how institutionalised systems are relied on to assert the politics of assumed knowledge, her work proposes alternate knowledge systems. Her projects involve history museums, scientific enquiry and forms of collective imagination, manifesting in photographic archives and films, installations and sculpture. Futurology, museology, anthropology, cosmology and ecology are all areas the artist investigates. Dijkman has had solo shows most recently at NOME Gallery, Berlin, Munchmuseet, Oslo and fig‑2 at the ICA Studio. She has also participated in numerous group exhibitions such as Contour Biennale 9, Mechelen, the 21st Biennale of Sydney and the 11th Shanghai Biennale.

Toril Johannessen is an artist living in Tromsø in Norway. Perception and representation as historical and technological constructs are recurring themes in Johannessen’s artistic practice. Combining historical records with fiction and her own investigations, and with an attention to how science coexists with other systems of knowledge and belief, her works often have elements of storytelling in visual or written form. Most recent solo shows include Entrée and Trykkeriet, Bergen (2019); OSL Contemporary (2019), Munchmuseet on the Move, The Munch Museum, Oslo (2018) and Hordaland Art Centre, Bergen (2017).