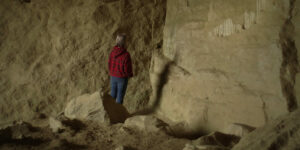 Daniel Mann
Healing and Killing in the Underground

London-based filmmaker and writer Daniel Mann explores how image production shapes perceptions of armed conflict, colonisation and climate emergency. His films have screened internationally, including Motza el hayam (Low Tide) (2017) which premiered at the Berlinale’s Forum, and Salarium which was presented at the Sonic Acts Academy in 2018.

Daniel Mann’s talk, titled Healing and Killing in the Underground, features a screening of an episode from Eitan Efrat’s and Mann’s film The Magic Mountain (2020). Thinking the surface of the Earth against its volume is tracing the very limits of representation. Underneath the ground, human bodies become surfaces upon which the land leaves its mark, imprinted directly into the cells and tissue. While the landscapes outside are captured and mediated in the form of postcards, paintings, snapshots and films that appeal to the naked eye, a rare energy leaks through the crevices in the stone below, before it is inhaled into the lungs, absorbed and consumed through the skin. Underground the body is the postcard of the subsoil. 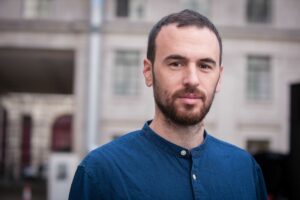 Daniel Mann is a London-based filmmaker and writer. Mann explores the role of image production and circulation in shaping collective perceptions of armed conflict, colonisation and climate emergency. His 2017 film Salarium, co-directed with Sasha Litvintseva, was presented at the Sonic Acts Academy in 2018. His writing has appeared in journals such as Media, Culture & Society and World Records and his films have screened internationally at festivals including Berlinale (Forum). Mann holds a PhD from Centre for Research Architecture at Goldsmiths, University of London. As a Leverhulme Early Career Fellow at the Film Studies Department, King’s College London, he is developing a new project on the role of Middle Eastern desert environments in cinematic depictions of war, conflict and future annihilation.

Eitan Efrat is a Brussels-based artist working in video, film, installation and painting. His practice focusses on reading the performativity of still and moving images, and the relation between spectatorship and history. He is also a drummer in funk-rockabilly-blues trio The Ramirez Brothers. Together with Sirah Foighel Brutmann, he founded the production company Til Far, which produces projects in the field of video art and dance for which he has co-directed shorts including Miroir Séb Fragile ! (2017) and Perfect Cut (2019). He collaborates with Foighel Brutmann on audiovisual works shown at film festivals such as International Documentary Festival Amsterdam (IDFA) and venues including Kunsthalle Basel. Together they are part of artist-run collective Messidor.

Still from 'The Magic Mountain' (2020) by Eitan Efrat & Daniel Mann