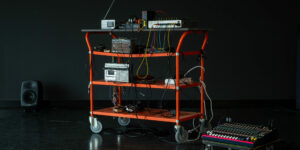 How can radio respond to site-specific needs in useful and collaborative ways? To answer this, MÆKUR (Maiа Urstad, Eva Rowson and Anton Kats) track how new technology outmodes past forms, often repurposing old equipment to make new radio labs, expanding how we listen and programme. The who and why remain critical, as does sensory input – the subconscious sounds absorbed in understanding place and community. MÆKUR sets up a temporary radio lab and listening space at De Brakke Grond’s Tuinzaal in lead up to their performance at Sonic Acts.

In Conditions 2020 – A Live MÆKUR Radio Broadcast, MÆKUR transforms the space into a radio studio, playfully engaging with FM and AM broadcasting formats. They transmit several scenarios in which the radio of the future takes stage. In their speculative performance they also share excerpts from their first vinyl and digital release, Conditions: 1218 – 0719, which includes recordings from the archive gathered and improvised during residencies at Bergen Kunsthall and Lighthouse, Brighton in the past two years. 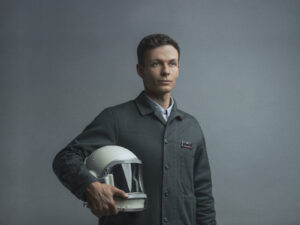 Anton Kats is an artist, musician and dancer whose work often unfolds in public and liminal spaces as sculptures, interventions, concerts, learning sites and public programmes involving radio, sound, video and research. His practice derives from informal everyday relationships in the vibrant neighbourhood of Kherson, Ukraine in which he grew up, complemented by the process of self-legalisation in Europe. Under the name ILYICH he merges fine art and electronic music. Kats has lectured at various universities and received a practice-based PhD from Goldsmiths, University of London. At Sonic Acts in 2016, his talk and sound performance Radio Sound System conveyed his neighbourhood-oriented broadcasting practice. He has also shown at Serpentine Galleries, Tate Modern, documenta 14, 10th Berlin Biennale and Haus der Kulturen der Welt, among others.

Eva Rowson is an artist and curator from the United Kingdom. Her practice is organised around hosting, collaborating and building organisations, focussing on how the different types of work involved are valued and with what consequences. This research is at the core of collaborative projects including living-room project space 38b, co-run with Luke Drozd; ¿Cómo imaginar una musea?, a Catalan-Spanish-English project on conjuring a cultural institution from a feminist perspective; and Making a flan without knowing the mould with Jordi Ferreiro. From 2018 to 2019 Rowson was curator at Bergen Kunsthall and also curator-in-residence at Lighthouse in Brighton, where she led a programme on the politics of institutional re-imagining asking, ​‘Who’s doing the washing up?’ She co-runs Bergen’s golden jar, an experimental music platform to support female and non-binary practitioners working on and off stage, and leads the MFA course on collaborative practices at Faculty of Fine Art, University of Bergen.

Maia Urstad is an artist based in Bergen working at the intersection of audio and visual art. She was a member of ska/new-wave group Program 81, touring from 1979 – 84. Technological progress and communications technology are pervasive in her work, in which radio is a key audio, visual and conceptual element with which to comment on the temporary nature of technology and the traces and stories left behind in our daily lives. Appointed city sound artist of Bonn in 2017 and awarded the Rune Brynestad memorial grant in 2019, her most recent solo and collaborative projects took place in the context of 14th Bienal de Artes Mediales in Santiago, Bergen Kunsthall and Radio Revolten. Urstad co-founded Lydgalleriet in Bergen and is part of the international sound art collective freq_​out curated by CM von Hausswolff with which she participated in Sonic Acts 2013.

A co-production of Sonic Acts with Bergen Kunsthall & Lighthouse as part of Re-Imagine Europe, co-funded by the Creative Europe programme of the European Union.