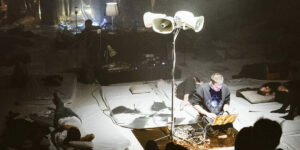 Žaburina, a multichannel sound performance commissioned by Ina GRM, has its world première at Sonic Acts. Based on Jonáš Gruska’s eponymous 2018 album, the work in constant progress explores the imaginary folklore music of underwater nations. Although all sounds are synthesised, they are heavily inspired by hydrophone recordings and mouth-organ music from East Asia. Polymetric rhythms are used as compositional tools that expand through the multichannel system to their own specific instruments or overlap in complex non-Western scales. The centre of the work is a system of rotating PA horns, traditionally used for announcements in Slovakian villages – repurposed here as a very specific psychoacoustic-enhanced sound distribution system. 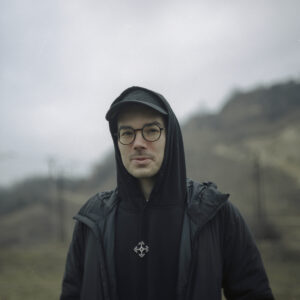 Born in the former Czechoslovakia, experimental composer Jonáš Gruska studied at the Institute of Sonology in The Hague and Academy of Music in Kraków. His interest in chaotic and polymetric rhythms, unconventional tunings and the psychoacoustic properties of sound and field recording manifest in site-specific sound installations based on resonant properties of spaces and materials. He has given workshops on sonification, field recording, electromagnetic listening and programming for artists and created the Elektrosluch – electromagnetic listening device. In 2009, he started the label LOM, focussed on East/​Central European experimental art and music, opening the LOM space for contemporary sound in Bratislava nine years later.