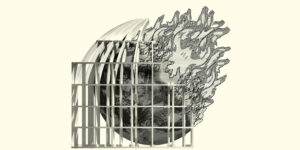 Architects Rania Ghosn and El Hadi Jazairy co-founded DESIGN EARTH to engage with geography in addressing humanity’s relationship to the Earth through architecture. From Monaco to Mexico City, their research develops projects around concepts such as hypothetical volcanos, the ​‘Pacific Cemetery’ where satellites go to die and a methane aviary as waste disposal unit rendering gas pipes a forest for birds.

Rania Ghosn (DESIGN EARTH) begins her lecture Geostories with the question: How might the geographic imagination convert into an image and narrative of the climate crisis? That is, not only as a calamity of the physical environment, but also as a predicament of the cultural one – of the systems of representation through which society relates to complex and unknown environmental futures. In Geostories, geographic fiction becomes a medium to synthesise different forms and scales of knowledge on technological externalities, such as oil extraction, deep-sea mining, space debris and a host of other social-ecological issues, and to speculate on ways of living with such legacy technologies on the planet. 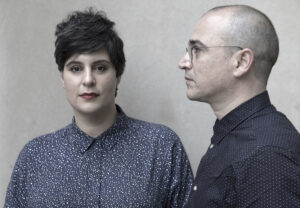 The collaborative practice DESIGN EARTH based in Ann Arbor, Michigan and Cambridge, Massachusetts and is led by architects Rania Ghosn and El Hadi Jazairy. DESIGN EARTH literally means ​‘earth-writing’, deploying geographic aesthetics as a form of environmental speculation in the age of climate change. The practice received a Young Architects prize from the Architectural League of New York and DESIGN EARTH have been commissioned by the Venice Architecture Biennale, Seoul Biennale of Architecture and Urbanism and Oslo Architecture Triennale. Projects have been exhibited in international art spaces such as SFMOMA and Times Museum, Guangzhou and acquired by the New York Museum of Modern Art. Ghosn is an Assistant Professor at Massachusetts Institute of Technology School of Architecture + Planning and Jazairy is an Assistant Professor of Architecture at University of Michigan. They co-authored Geostories: Another Architecture for the Environment (2018), ​‘a manifesto for the environmental imagination’, and Geographies of Trash (2015).

Magical Thinking: Towards a Future Worth Living – Conference Day 2

This conference proposes the idea of ​‘magical thinking’ – a belief that thoughts and actions can influence the world – as a provocation. In current dystopian scenarios of the future life on Earth, from environment to democracy, imagining a future worth living might reduce anxiety that paralyses action and create openness to a more inclusive way of thinking. The question that needs answering is what is a future worth living (and for whom), and which tactics could get us there. How do we get from climate emergency and catastrophic populism, fuelled by extractive capitalism, to a world of social/​ecological justice and multispecies equality? With focus on artistic research and strategies of visibility and mobilisation that art holds, this forum wishes to open critical discussions and propose possible ways to the future worth living.

How can one make sense of the climate crisis – environmental, but also political – when confronted with the immense complexity of Earth both in time and space? Two panellists, Rania Ghosn (DESIGN EARTH) and Lukáš Likavčan, speculate on and activate environmental imagination through geographical fiction and comparative planetology. Their research tactics take up history and geographic representation in an attempt to untangle the ways visual culture imagines the Earth and geopolitics of climate emergency.

This panel will be moderated by Victoria Douka-Doukopoulou.