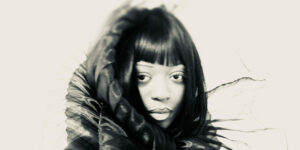 Cõvco
Consciente of the soul

While on the bill with known London DJs like Avalon Emerson, Ben UFO and Objekt, Cõvco explores the scene’s outermost reaches in her sets and music performances alike. Alongside Arca and Total Freedom, she recently contributed to fundraising for Association for Queer Ethnic Minorities, her R&B edits, noise, footwork, techno and rap coursing through each irresistible dance track.

Consciente of the soul is a performance of a woman’s mortality. This linear journey embraces a cosmic state through rituals addressing the limitations of body and mind, a playful bandaging of mental and physical past, and fear in facing reality. The beauty of self-stimulation comes through in repeating sounds, words and movements. Produced, written and choreographed by Cõvco, the drama is an experience of rebirth. Dancers shadow the artist whose performance of movement, stillness and glitch is a transparent tug-of-war between chaos and clarity. Finally, the audience is welcomed to the table as a social experiment, practising self-indulgence and stimulation through food ASMR. 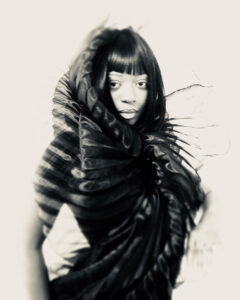 The sets of the London-based musician and DJ Cõvco combine a high energy mix of footwork edits and experimental dance music that often result in a frenzied dance floor experience. With some early explosive sets at London’s Tropical Waste parties and supporting RP Boo, Cõvco has since made appearances across the United Kingdom and Europe alongside the likes of Lee Gamble, Objekt, Joy Orbison and Danny L Harle.

Cõvco. Photo courtesy of the artist.